Dedicated to the preservation of Lake Arrowhead 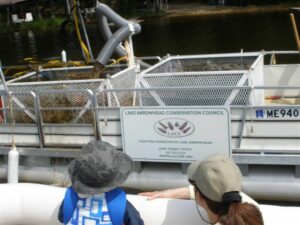 About LACC – a 501c3 non-profit organization

LACC emerged as a volunteer group from a local group of waterfront owners lead by Dave Sanfason and known as MAG Force.  Working with the LAC Board, MAG leaders realized that a formal LAC Committee would be needed to address the variable leaf milfoil problem that had been found in Lake Arrowhead.  In their wisdom, they formed the Lake Improvement Committee and installed trustee Mike Fitzpatrick as Chairperson.

Realizing that grants from federal and state sources need to be directed to a 501C3 non-profit, Fitzpatrick realized we would need to set up a non-profit tax-exempt corporation to allow for grant funding.  Within six months or so, all paperwork had been filed with the Federal Government and Lake Arrowhead Conservation Council was formed as a non-profit.

Since that time, LACC has partnered with the Maine DEP, COLA, Maine VLMP and other lake based conservation groups to develop the most robust DASH Harvesting program in the state.  LACC has grown from building one initial harvester to running two.  The second harvester was a result of partnering with the Maine Milfoil Initiative which was Federally sponsored and lead to LACC receiving a grant which allowed us to build our second harvesters.

We have grown to over 160 members in the past twelve years and have also established strong relationships with both the towns of Limerick and Waterboro.  Both towns contribute annually to our mission of milfoil removal.

This website uses cookies to improve your experience while you navigate through the website. Out of these, the cookies that are categorized as necessary are stored on your browser as they are essential for the working of basic functionalities of the website. We also use third-party cookies that help us analyze and understand how you use this website. These cookies will be stored in your browser only with your consent. You also have the option to opt-out of these cookies. But opting out of some of these cookies may affect your browsing experience.
Necessary Always Enabled
Necessary cookies are absolutely essential for the website to function properly. These cookies ensure basic functionalities and security features of the website, anonymously.
Functional
Functional cookies help to perform certain functionalities like sharing the content of the website on social media platforms, collect feedbacks, and other third-party features.
Performance
Performance cookies are used to understand and analyze the key performance indexes of the website which helps in delivering a better user experience for the visitors.
Analytics
Analytical cookies are used to understand how visitors interact with the website. These cookies help provide information on metrics the number of visitors, bounce rate, traffic source, etc.
Advertisement
Advertisement cookies are used to provide visitors with relevant ads and marketing campaigns. These cookies track visitors across websites and collect information to provide customized ads.
Others
Other uncategorized cookies are those that are being analyzed and have not been classified into a category as yet.
SAVE & ACCEPT