I came across a flowering Swollen Bladderwort, Utricularia inflata, in Lake Arrowhead, Maine, in October 2021 whilst doing a late season invasive plant survey by kayak.

I was very suspicious of its appearance – it’s certainly a unique looking plant, with obvious similarities to the flowering mechanism of Utricularia radiata, but this one was, well, grotesque and very robust, by comparison. The ‘floats’ holding the flower up out of the water were fat and bloated, and had numerous rooty looking tentacles on them. It was almost the stuff of sci-fi imaginings; not delicate enough for Utricularia radiata but yet, similar. Alarm bells started tinkling, and then clanging, in my head. I took a series of photos without disturbing the plant, then went home to convey my findings to the Lake Stewards of Maine (LSM), and peruse my aquatic plant books to help me sort through my suspicions.

Everything I read filled me with dread, for it seemed I had found a plant not previously documented in Maine – a bladderwort invasive to our region of the country. While I was thrilled that I had found something potentially exciting, a new discovery, I obviously had mixed emotions about finding another invasive plant.

Dale Schultz and aquatic biologist Dr. Keith Williams then accompanied me to visit the site where I had found the first specimen. We found about 4 more flowering plants in the same cove. Keith confirmed my identification, and removed a few samples to be pressed for herbariums across the state.

I then set out to survey further afield, ‘thinking like a bladderwort,’ as much as possible, to hone in on other areas where it might be growing. After scouring many shallow, stagnant, warm-water coves in our lake, I found a smattering of more flowering plants, which drew visits from botanists from regional organizations, all of whom were interested in seeing this species. There were some fantastic examples of floats still forming amongst the leaves and stems at this location.

In early November, I found another thriving population in a beautiful, stump-filled wetland area. Roberta Hill, then Invasive Species Program Director of LSM came to observe the plants in their adopted habitat, and get a sense of its abundance in our lake.

The realization finally hit me, after looking at specimen after specimen attached to the floating underwater vegetation, that much of the non-blooming, floating bladderwort foliage I had been seeing in our lake up until this point, was actually non-flowering U. inflata instead of U. vulgaris, the Common Bladderwort. Being able to associate the exquisite branching and randomly arranged, uniformly sized bladders with the flower and its larger floats, was critical for future identification of this plant. Dale Schultz and I were able to create a key to separate it from the Common Bladderwort. After that, the foliage began to jump out at me as something uniquely different from the other bladderworts in our lake. It was satisfying to be able to identify the species by foliage alone.

Another very interesting aspect of the Swollen Bladderwort discovery in Lake Arrowhead, is that we observed it blooming again in May, 2022, in the very same areas it had been found blooming in fall 2021. I have continued monitoring the same locations over the summer, and have not found U. inflata flowering since then, when the floating-leaved plants (spatterdock, fragrant water lily and watershield) began blooming and covering the water surface. I aim to continue surveying through October/November again this year to check this out, as it seems our population of U. inflata might have a flowering pattern restricted to when water temperatures are cool.

Perhaps this plant has eluded discovery until now because very few people go surveying in October, when the gorgeous yellow flowers stand high above the conspicuous, tentacled floats. Without this display, the floating leaves are easily overlooked – I was fortunate to have been in the right place at the right time. 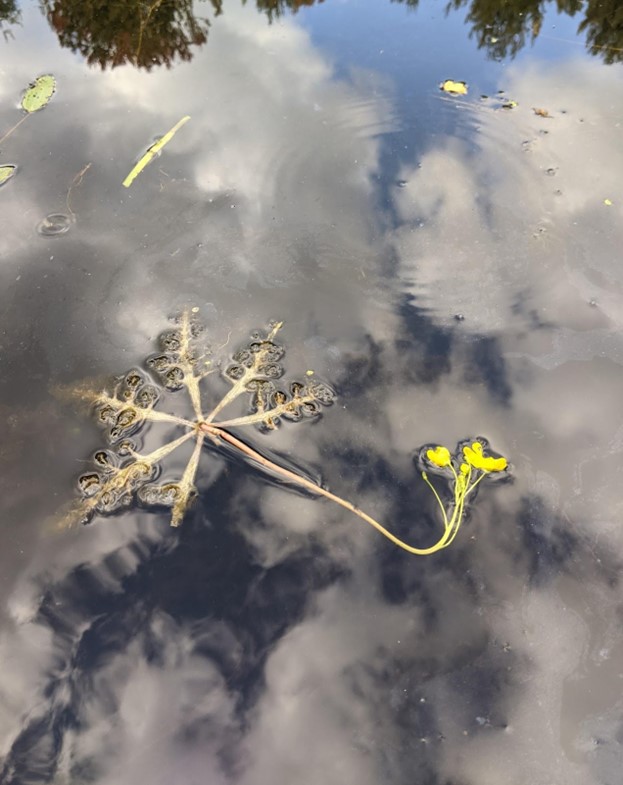 My first sighting of a Swollen Bladderwort, Oct 8, 2021. Lake Arrowhead, York County, ME

(Published in Maine Natural History Observer, 2022 Issue 2 –  You can check it out here:

This website uses cookies to improve your experience while you navigate through the website. Out of these, the cookies that are categorized as necessary are stored on your browser as they are essential for the working of basic functionalities of the website. We also use third-party cookies that help us analyze and understand how you use this website. These cookies will be stored in your browser only with your consent. You also have the option to opt-out of these cookies. But opting out of some of these cookies may affect your browsing experience.
Necessary Always Enabled
Necessary cookies are absolutely essential for the website to function properly. These cookies ensure basic functionalities and security features of the website, anonymously.
Functional
Functional cookies help to perform certain functionalities like sharing the content of the website on social media platforms, collect feedbacks, and other third-party features.
Performance
Performance cookies are used to understand and analyze the key performance indexes of the website which helps in delivering a better user experience for the visitors.
Analytics
Analytical cookies are used to understand how visitors interact with the website. These cookies help provide information on metrics the number of visitors, bounce rate, traffic source, etc.
Advertisement
Advertisement cookies are used to provide visitors with relevant ads and marketing campaigns. These cookies track visitors across websites and collect information to provide customized ads.
Others
Other uncategorized cookies are those that are being analyzed and have not been classified into a category as yet.
SAVE & ACCEPT